WOBURN–The Hamilton Company, through its affiliated partner, New England Realty Associates Limited Partnership, has acquired the 181-unit Mill Street Garden Apartments in Woburn for $59.5 million, with pre-approved plans to build an additional 72 units on land across from the existing complex.

Jameson Brown, son of the late Harold Brown and Hamilton’s Co-Chief Executive Officer and Chief Operating Officer, said, “the purchase of Mill Street Garden Apartments is consistent with our company’s objective to grow our portfolio by providing moderately-priced housing at a time when many families are being priced out of the Greater Boston housing market.“

Founded by the late Harold Brown in 1954, The Hamilton Company currently owns and manages 5,778 residential units, primarily in the Greater Boston area, and 1.3 million square feet of commercial real estate, of which 2,730 residential units are held in the publicly-traded New England Realty Associates (NERA) and 688 units in privately-held joint ventures with NERA.

Of the 181 apartments at Mill Street Gardens, three are studios, 64 are one bedroom and 114 are two bedrooms. Each unit has one bath, storage locker and outside parking. Brown said his company plans to spend an additional $500,000 this year to upgrade kitchens and baths, renovate the pool area, install new fencing, upgrade the laundry system and make landscaping improvements.

Brown said the $59.5 million purchase of Mill Street Garden Apartments from Ninety-Three Limited Partnership and other sellers also comes with approvals to build an additional 72 apartments on a 3.2-acre parcel across from the existing complex. The new 91,500-square foot, four-story building (see artist rendering) will have 22 one-bedroom apartments, 40 two-bedroom apartments and 10 three-bedroom apartments. Twenty-five percent of the apartments, or 18 units, will be affordable units, rented at 80 percent of the median family income for the Boston area. Ronald Brown, brother of Harold Brown, is President of New England Realty Associates, which is listed on the New York Stock Exchange under the symbol NEN. Ronald also is Chairman of The Hamilton Company Charitable Foundation, which allocates millions of dollars annually to local non-profit neighborhood groups, charities and associations.

Andrew Bloch, who shares the CEO title at Hamilton with Jameson Brown and serves as the company’s Chief Financial Officer, said financing for the purchase of Mill Street Garden Apartments was secured through Christopher Black of Keybank Real Estate Capital. Bloch noted that, “Hamilton and NERA were able to secure long-term financing on very favorable terms because of the quality of the property and our strong balance sheet.” Guilliaem “Rusty” Aertsen, who succeeded Harold Brown as chairman of The Hamilton Company, said the company has the dedicated and experienced personnel, leadership and financial acumen to build on its 66-year history of success. “Depending on the business-cycle and with our scale and financial strength, Hamilton can choose to acquire, develop or simply build liquidity to take advantage of opportunities as they arise,” said Aertsen. 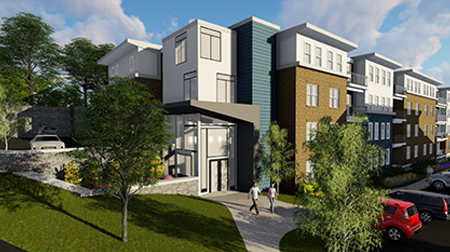