SOUTH BOSTON—A quintet of apartment buildings in one of Boston’s hottest residential markets is being pitched for sale through United Multi Family and Red Dome Realty. Totaling 27 units in the thick of South Boston’s traditional housing cluster, the assemblage could yield upwards of $15 million, according to unofficial estimates for what is being listed sans pricing guidance but chock full of enthusiasm from UMF Senior Director Kurt Cawley.

“We are excited about going to market with this deal,” Cawley relays in acknowledging the dual listing between UMF and Red Dome Realty, adding,“We are expecting a massive investor turnout, as very rarely does a portfolio of this size come out in South Boston.” Red Dome Realty principal J.P. Plunkett, whose father Joseph P. Plunkett assembled the assets in the 1980s and 1990s when South Boston CRE pricing was in a far different level than that found today, says he opted to engage UMF due to the firm’s broad brokerage platform combined with its multifamily specialty. “They are laser-focused on that industry, and they do it as much as anybody . . . We are extremely excited to be in an strategic alliance with those guys.”

Red Dome targets a scope of CRE including office, industrial and retail, and Plunkett himself worked helping to maintain his father’s portfolio before embarking on a CRE brokerage career including Cushman & Wakefield and NAI Hunneman, and he says the independent shop he launched five years ago this May has a database culled from three decades in the industry that will also be engaged in targeting prospective buyers.

But Plunkett stresses his desire to ensure the legacy sale produces “maximum” results for the properties his father tended over through some of the city’s harshest housing busts. “I know how hard he worked to keep that going, and it is exciting to see he will be rewarded handsomely for that with all that is happening in South Boston today. “ A marketing package for what is being branded “The Quinate” calls the holdings “a rare offering in what has become the most desirable neighborhood for young professionals in the city of Boston.” Along with Kurt Cawley, UMF’s contingent includes President Rich Cawley, Senior Associate Kyle Gossett and Associate James Barry working alongside Plunkett.

The portfolio is being listed with a trade of all buildings in one transaction anticipated, but Kurt Cawley says they could be split should returns warrant such a shift. Pitched as “exceptionally maintained” and “ideally located,” the Quinate buildings date back to 1890, and save for one property gut renovated in 2000, most of the stock is from the late 19th/early 20th century. All are transit-oriented with bus lines connecting to the Broadway MBTA Red Line many millennials rely on to access downtown Boston and Cambridge for work, and One Schrepel Pl. features almost half of the units (12) and eight off-street parking spots, an especially valuable element in a community infamously known for space savers and triple parking.

The additional income would be another bonus for One Schrepel Pl., according to the marketing package, a building that turns 100 this year and has been renovated several times by the ownership. It has seven two-bedroom apartments along with five one-bedroom layouts. Another half-dozen apartments are located at 722 East 6th St. in Southie’s City Point section. The brick property dating to 1899 has a pair of two-bedroom units and four one-bedroom apartments, including a former two-bedroom, converted to a large one-bedroom.

The remaining trio of buildings are each three-unit structures, with 550 East Third St. containing another oversized one-bedroom apartment that had been a two-bedroom format. The other units have two bedrooms, and had at one time been a commercial building until being converted in 2000, its location at the corner of K Street and East Broadway benefitting from a bus stop to Broadway Station, and a thriving retail cluster featuring Stop & Shop and Walgreens.

Denizens of 84 Emerson St. and 167 K St. also have bountiful shopping options outside their doorsteps. The former is near both East and West Broadway with connections to Broadway MBTA in 10 minutes from that building completed in 1890 and also upgraded through the years. The final listing at 167 K St. dates to 1905 offers residents of its three apartments a common-area roof deck.

“There is an extremely strong, continued demand for quality, working-class multifamily rentals in Southie and the Seaport—and the Quinate is a value play that will surely grab the attention of investors near and far,” the UMF/Red Dome offering predicts. Both Kurt Cawley and Plunkett report the Class B housing sector is deemed preferable to many investors who see greater yields and a broader audience of prospective tenants.

Should the Quinate achieve $15 million, the unofficial estimate some observers have portended, that would equate to $555,555 per unit. Owner Joseph P. Plunkett spent an aggregate $1.21 million on the five buildings, assets acquired between May 1986 and June 1996. That would calculate to $44,800 per unit. 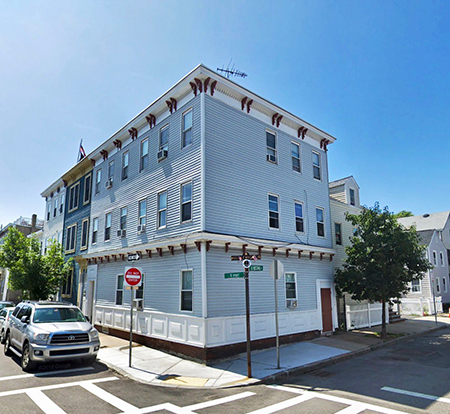 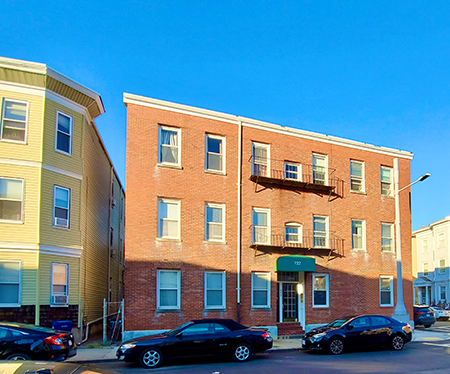