CAMBRIDGE –The MIT Center for Real Estate has been at the forefront of the CRE technology revolution since launching its groundbreaking “Real Disruption” series five years ago, so the increasingly powerful impact that realm is having on all aspects of the industry was naturally a linchpin of their sold-out World Real Estate Forum held this past week at the MIT Media Lab. From Dr. Vladimir Bulović’s opening session on “The Power of the Nano-scale to Transform the Built Environment” to Dr. Andrea Chegut’s presentation on current and future applications of CRE technological innovations, the program illuminated a massive transformation taking place in the global real estate industry.

And while that change is being driven by technological advances, the impact those technologies are having on how people work, live and think about what is important in their life emerged as a secondary thread at the conference. “One of the takeaways for me was that it’s not necessarily the apps per se, it’s the society that is emerging out of the digital technologies,” Dennis Frenchman, director of MIT/CRE told Real Reporter following the close of the conference. Frenchman declared that every single traditional real estate product—industrial, office, residential and retail—is either undergoing “fracking” (where the use of the asset gets broken into smaller pieces and re-configured into higher value combinations, as we are seeing with the WeWork and Airbnb models), or a radical transformation. “And when you see change of that magnitude happening across multiple fronts, you realize there’s something much bigger going on, and those things are being driven by different attitudes about how to live and work and what is valuable in our lives,” Frenchman observes. As a result, the social changes being wrought by those technologies is producing a “special kind of culture,” he says. “It’s a particular mix of people, place and work that yields a highly valuable outcome.”

That sea change was reflected in the panel discussion moderated by Frenchman, “Real Estate’s Industry Transformation: From Developing Projects to Making Cities,” that featured representatives from several global development companies shifting their models from simply developing real estate projects to actual city-making using recalibrated metrics. The panel featured Nina Yang, CEO of Sustainable Urban Development for Singapore-based Ascendas-Singbridge, which is constructing the China-Singapore Guangzhou Knowledge City in China; Denis Hickey, CEO of the Americas for Lendlease, which is developing Barangaroo South, a 19-acre mixed-use development in Sydney, Australia that will house 1,500 residents and 23,000 office workers; and Guy Perry, VP of Urban Planning and Design for McKinsey & Company, which is advising on multiple large-scale projects around the globe.

Working in conjunction with government economic development agencies, these cities are being built using the principles of “environmental, economic and social sustainability,” according to Yang, who added that “a city needs a heart . . . meaning a reason for it to exist.” When the project began in 2008, Guangzhou was seeking to transform from a manufacturing economy to a service-based one, and is now morphing into a booming innovation-based metropolis powered by knowledge-based industries related to the internet of things, big data and cloud ecology. The transformation began with heavy investment in infrastructure through the public-private partnership, including two new subway lines that significantly improved connectivity in the district.

McKinsey focuses on a “number of metrics – not just financial gain” involving large-scale projects, Perry explained, including livability, sustainability, and wellbeing. “The kind of (key performance indicators) that we used to use just for economics, now we use them across the board. So these are the metrics we look at and we see how all of these things integrate, and that’s how we really believe that we can best drive value.”

To put things in local perspective, Frenchman later acknowledged that the same types of city building models—public-private partnerships that help to develop infrastructure, creating a sense of place, and constructing a diverse environment that contributes to creativity and innovation—are present in local projects as well. Assembly Row in Somerville is one example, with its substantial upfront investment in transportation infrastructure and focus on developing a LWP environment from the ground up. And the redevelopment of Allston train yards by Harvard, where plans will free up land for a new train station and dozens of acres of new development by the university (which owns the land), is also indicative of the new model, the panelist noted.

The ambitious two-day forum featured 17 sessions and 55 speakers from around the globe (many of whom are MIT faculty and alums) covering topics that included new financing and development models for residential and commercial development; how the enormous amounts of data being compiled can best be used in strategic decision making; hype vs. reality of artificial intelligence (AI); and a discussion of how tech firms are getting into the real estate business, featuring the directors of real estate from Google (Paul Darrah) and Facebook (Christopher Hom). During her presentation, Dr. Chegut outlined ways climate change and automation are affecting the built environment, and also gave participants a glimpse into the future of emerging technologies such as AI, augmented reality, hyper cells and digital twins – technologies that are still very much in their early stages.

National Development Managing Partner Ted Tye was on hand for the final day of the program to participate in a panel on “New Models for Living” that examined a number of evolving concepts such as co-living and shared membership that “are fundamentally changing how we look at multifamily.” NatDev is a leader in that realm; Tye was joined by fellow panelists Michael Beckerman, Ana Britten, Atticus LeBlanc and Irina Listovskaya for the morning program that generated a broad-based discussion of the topic of particular interest in metropolitan Boston where traditional multifamily concepts have been strained by excessive land costs and other roadblocks.

Despite the intense focus on ways that technology is forever altering CRE, event organizers stressed the importance of including the human element into the programming. One of the modules, appropriately entitled, “Forget Tech, What About the Humans?” focused on how architects, urban planners and other CRE disciplines are making real estate technology more human-centric. “As we were putting the Forum together, we said, ‘Maybe we should have a conversation that throws all the technology out the window, because we know it all comes down to human beings,” said Steve Weikal, head of industry relations for MIT/CRE. “Because a lot of technology ends up not working because people overlook the human element.”

Weikal also maintains that much of the content presented accurately reflects the sweeping changes now taking place in the industry. “There’s a really lot of thoughtful work going into this transformation,” he said. “It’s not just putting up the building and moving on anymore. It’s just not how the industry is going to work going forward.” 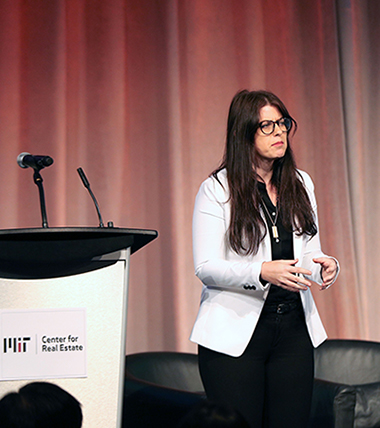 Andrea Chegut Presenting on Current and Future of CRE tech