BOSTON — Greater Boston apartment rents have recovered completely from the dramatic drop that began during 1st-quarter 2020, a return to normalcy welcomed by multi-family property owners across the region after having suffered 18-months of uncertainty brought on by COVID-19. Still, prices are not where they could be had the pandemic never happened, and external events may end up threatening or even eliminating any near-term future gains.

These bounce-back rents are the result of lower vacancy rates, according to recently-released data from Apartment List, the online listing platform, reporting on the city of Boston and in the metropolitan Boston area, which stretches across 168 cities and towns, from Portsmouth, NH to Plymouth, MA.

Boston rents suffered more harshly by the pandemic than other major US cities when it comes to vacancy rates. Even San Francisco and New York City - cities that received the most critical media attention - performed better during the pandemic, according to the report.

The vacancy rate in Boston jumped into the double-digits by the end of 2020, as landlords responded rapidly to a severe reduction in the number of college students returning to the metro area and an exodus of residents and workers out of the city CBD; many who let their leases expire rather than renew or move at lease end.

Things weren’t as bad for the metropolitan area as a whole, however; although vacancies were at a higher rate than several other major regions, they did track in the same direction, again according to the data. This increase in vacancy resulted in lower actual rents, especially within the city of Boston. Those signing new leases enjoyed a reduction in rent of more than 23 percent between January to December of last year.

Yet, according to Apartment List, Boston prices remain below the “projected” level defined by the city’s pre-pandemic seasonal trend. August’s rent price (according to the report) would be $2,282, 7% higher than the actual value. Still, things are improving and there may be room for more appreciation, according to data analyst Rich Warnock of Apartment List. “It’s possible the convergence will take place before the end of the year since the projected price will fall for the next few months while actual rent growth should remain positive.”

Complicating those predictions for the near future are two recent developments: the expanded and extended unemployment benefits provided to residents of the Commonwealth, as well as an extra $300 weekly payment given to many of the unemployed, ended at the end of August, affecting an estimated 300,000 people in Massachusetts - which for some tenants could strain resources meant for rent to their landlords.

In Boston, Acting Mayor Kim Janey, through the city’s Public Health Commission, implemented her own eviction “moratorium” after the US Supreme Court overturned the federal Centers for Disease Control’s moratorium on August 31st, which effectively bans landlords from removing any tenants for lack of payment for any other reason besides criminal behavior.

Although Janey will not be Boston’s mayor come January 2022 (after losing in last week’s preliminary election) one of her presumed replacements, either Boston city councilor Annissa Essaibi George or Boston city councilor Michele Wu, has expressed similar opinions on the halting of evictions. Neither has discussed any end date for the moratorium. Still, Boston apartment owners continue to be in a very favorable position when it comes to median rent prices - ranking 3rd nationally positioned only behind New York and San Francisco for the nation’s most expensive rental cities. 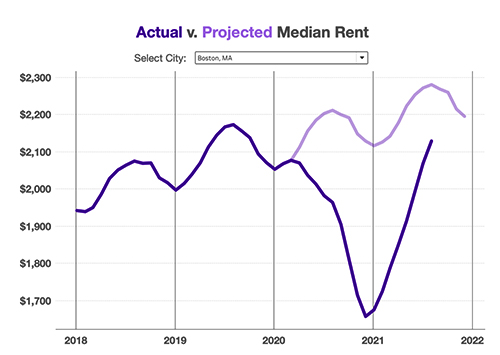