BOSTON–It has been an autumn affair for the past thirty-one years, when more than 500 CRE professionals gather to honor an individual, or a team, in recognition of outstanding contributions made to the real estate industry.

On October 17th The Real Estate Finance Association will commemorate Jonathan G. Davis as its 31st-recipient of the Robert S. Swain Jr. Distinguished Service Award. Davis, CEO and founder of The Davis Companies, will be presented with the Boston Harbor Bowl at the annual Gala, held at the Westin Copley Place hotel.

Davis reflected on the award’s historical significance. “I am deeply honored to receive the Swain Award. I remember Bob from my early days as a customer at the Bank of New England. He was a larger than life figure, especially to a young thirty-something developer like me. His name signifies dignity, probity, thoughtful investing and commitment to the community. To be honored with an award in his name and to join the truly illustrious group of former recipients, all of whom are genuine leaders in our industry, is very moving for me.”

Davis’s track from a middle-class family in the Squirrel Hill neighborhood of Pittsburgh to an esteemed CEO of a full-service investment and development firm that’s active across the Eastern US is known to many industry peers; how he left home to attend college at Brandeis University, fell in love with the city of Boston (and, not coincidentally, Margot, his wife), and quickly established himself in what was then a small, insular and parochial real estate industry.

Originally planning to enter law school, Davis decided to give real estate investing a try and embarked on a career as a small scale real estate investor and developer, right out of college. In 1976, he convinced his father, a dentist, and his mother, a school teacher, to re-mortgage their home so that - at age 23 - he could make his first big real estate buy - a city block of brownstone buildings dating to 1905 in Jamaica Plain. Eventually a very successful investment, it was an experience that Davis considers as one of his proudest achievements – rewarding his parents for their trust and providing them a better life through his own hard work.

Even though Davis concedes the first years involved “creative leveraging” and typical start-up bootstrapping - and he “wouldn’t go back,” he still claimed, “The early days were fun.”

One of Davis’s first projects was turning the Brimmer Street Garage in Beacon Hill into the first condominium for cars in America. The March 1979 purchase price for the entire garage was $440,000 - a cost equivalent to a single space that recently sold just this past August.

Yet, like most businesses with staying power, The Davis Companies has had to weather the economic cycles with resourceful determination. The savings and loan crisis of the late 1980s and early 1990s caused major stress and calamity throughout the country and, by default, left more than a few local companies in the dust (including the aforementioned Bank of New England).

Davis responded, not by shutting down but by “leaning in”, seeking opportunity as a buyer of distressed assets; a decision that paid off handsomely as the lending industry and the economy began to recover.

Two decades later, the global recession, via the financial meltdown was its own unique crisis - but again he and his company persevered, and pressed on. The secret sauce? Davis cites the company’s ethos of setting a vision and then bringing it through to realization. “I’ll attribute it to - more than anything else - that we’ve evolved our strategy to respond to changing market conditions - finding and overcoming new challenges.”

Even today, after 45 years in business and 200 projects completed, The Davis Companies is actively pursuing new opportunities throughout the country.

Here in Boston, that includes 100 Shawmut, a 138-unit condominium project currently under construction in the city’s South End neighborhood, 104 units at The Mark on the East Boston Waterfront, two lab developments in the Alewife neighborhood in Cambridge, the redevelopment of the 370,000 SF 88 Black Falcon office/industrial property in Boston’s Seaport District and development of the 1,054-room Omni Boston Hotel at the Seaport, directly attached to the Boston Convention and Exhibition Center, on the South Boston Waterfront, which broke ground last year and is expected to open by early 2021.

The $550 million hotel project is something that Davis is especially proud of, not just because of the physical building but because of the groundbreaking diversity and inclusion plan that he and his partners developed as part of their project proposal.

Instead of simply mandating a percentage of diversity hires for design and construction, Massport, the Ground Lessor for the property, emphasized minority and female ownership among bidders and the participation of minority and women-owned firms as their partners. At the end of the day, the Davis Companies’ development team included more than 20 Asian, Hispanic, and African American investors, and nearly one-third of the design phase will be done by companies owned by women or minorities.

Through job-training and community outreach, the 800 people who will have permanent jobs at the new hotel will be offered meaningful opportunities for professional growth. This public-private agreement is a model that has captured the attention of governments and developers across the country. It’s this type of creativity in the industry that inspires Davis - that, and, “We have an incredibly talented team and I am learning from them every day,” Davis adds.

Yet, Davis is recognized by his peers for accomplishments far beyond his real estate projects. It is his dedication to neighborhoods and causes that his colleagues and REFA recognize him for. “Jon embodies the Swain Award. As a successful business person who is dedicated to giving back to his community in multiple ways - and he does it not for recognition but because he fundamentally cares,” said Claudia Piper, Senior Vice President at Webster Bank. Accolades that Davis quickly credits to others and his family.

Through their family foundation, Jonathan and Margot Davis are significant contributors to the Boys & Girls Clubs of Boston, The Combined Jewish Philanthropies, Heading Home and public radio station WBUR, as well as to many other local charities and organizations.

In 2014, the United Way of Massachusetts Bay awarded Davis its Norman Leventhal/Edwin Sidman Community Leadership Award. In 2015, The Boston Preservation Alliance awarded him its President’s Award for Excellence in Historic Preservation.

Away from work, learning is high on the list of things Jonathan Davis finds time to do. Thirty-five years ago his wife bought him a saxophone but he had no spare time to learn to play in those early days of raising a family and building a career and a business. Then, a few years ago, both of his children got engaged. He and his wife were determined to play love songs at their weddings, so she brushed up on her piano-playing skills and he began saxophone lessons. Nine months later they played at their son’s wedding; and eleven months after that, at their daughter’s. “We were a lot better at hers!” he joked.

Forty years after beginning his real estate career, Jonathan Davis returned to his hometown of Pittsburgh in 2014, with The Davis Companies’ purchase of the landmark Union Trust Building. Bringing his professional and personal career back home, he came full-circle.

It seems a fitting tribute to honor Jon Davis’ hard work and his commitment to the community at the REFA Gala, as he embodies what the Robert S. Swain Jr. Distinguished Service Award exemplifies.

About The Davis Companies 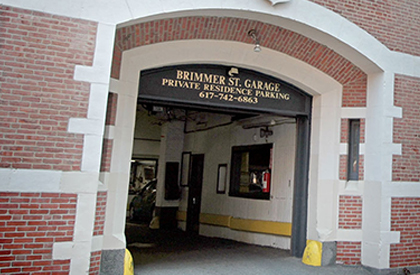 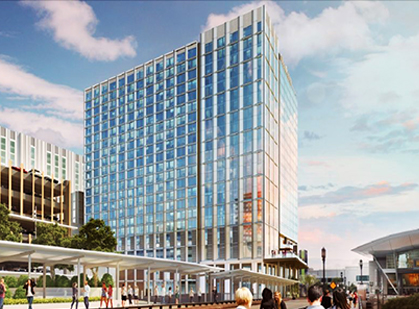 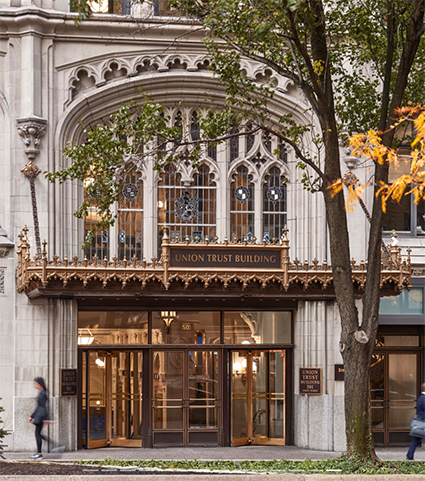