At MidYear Roundup Booming Boston ‘Number One’ Among CRE Investors

BOSTON—During her Capital Markets presentation at this past week’s NAIOP/SIOR Midyear Market Roundup, HFF Senior Director Kerry Hawkins told the gathering that in a recent meeting held in New York City, 11 of the 12 investors on hand cited Boston as “the Number One city to watch in the U.S. - if not the world, in terms of continued appetite for investment.”

And with good reason. Judging by the assessments of the CRE professionals who delivered overviews for the Downtown, Cambridge, Suburban and Residential markets at the annual forecast sponsored by NAIOP Massachusetts and the Society of Industrial and Office Properties. Boston remains a top choice for companies looking to attract and retain talent – particularly in life sciences and technology – despite record lab/office rents and increasingly steep housing costs. Rent growth and absorption are trending positively in most markets, and the development pipeline in both traditional and emerging neighborhoods is loaded, the presentations indicated.

Breslau indicated there is no imminent slowdown on the horizon for the near-record expansion (119 consecutive months and counting) of the American economy, as the “fundamentals remain incredibly strong,” including record highs in job openings at present. Wage growth nationally is hovering around 3 percent year-over-year, and in Boston, unemployment is currently at 2.9 percent - all of which bodes well for the local CRE industry.

In his assessment of the Downtown market, Lahey began by saying, “This is a very different market than we’ve ever seen before,” Lahey relayed in his Downtown assessment, observing that, “We have new tenants and new technology, and I wonder if there should be a different paradigm for evaluating the market moving forward.” For starters, he noted, there has been a massive shift in tenancy from financial services and law firms 10 years ago to TAMI (technology, advertising, media and information) companies in recent years; there are emerging neighborhoods (North Station, Allston/Brighton, Somerville) that now attracting both life sciences and office tenants; co-working is having a major impact as WeWork is on the verge of becoming the city’s largest office tenant (1.4 million SF and actively seeking large chunks of new space); and co-working operators now occupy 2.5 million sf in Boston.

Co-working’s impact extends well beyond taking space, Townsend explained, as the new model is forcing landlords to offer more flexible (read shorter) terms to tenants in order to compete with co-working; and life science operators are expanding beyond Cambridge into the Seaport (as recent headlines attest) as well as the emerging neighborhoods, including Allston-Brighton, Watertown and Charlestown.

In his report on the Cambridge market, Townsend joked that “given how tight the Cambridge market is, it’s a lot more fun representing landlords than tenants, because it’s been and will continue to be a tough, tough market for tenants.” The demand for lab space exceeds the supply by 10 times, with the vacancy rate essentially at 0 percent in Kendall Square, as 85 percent of the companies seeking office or lab space in Kendall Square are life sciences concerns. Rents are now cresting $100 psf, with one lab proposal out in the market for $130 psf, NNN, according to Townsend. Average lab rents are $90 NNN and office rents are $96 (gross). Cambridge properties are trading at record prices, as evidenced by the recent acquisition of the three-building, 690,000-sf Osborn Triangle by the Bullfinch Companies and Chicago-based real estate investment firm Harrison Street from MIT for $1.1 billion ($1,625 psf). And despite nearly four million sf of space set to be delivered by 2022, the picture doesn’t get any brighter for tenants, as 78 percent of that space is pre-leased.

“The suburban market continues to shine,” began Daniels in his market analysis, and that brightness includes positive absorption and rent growth in all submarkets. Shining most brightly, however, was the news out of North Andover that Dallas-based Hillwood will construct a 3.6 million-sf build-to-suit for Amazon at the former Osgood Landing, a deal which had been announced only the day before. But the larger story is the success of what he terms the “Fortress Market,” which runs along Route 128 from Needham to Woburn and consists of 21 million SF of office and 10.1 million SF of lab, as it is the only suburban submarket drawing interest from institutional capital. Waltham is the crown jewel of that corridor, commanding rents in the mid-$50s for office (gross) and from the mid-$30’s to the mid-$60’s (NNN) for new lab. The single largest downside to the Route 128 corridor remains the traffic, which Daniels described as, “just terrible.”

Occupancy in the Residential market remains strong, according to Sower, with even the suburban market sporting an impressive 94 percent occupancy rate. The leader of Colliers’ multifamily team attributes those numbers to the tremendous post-recession job growth (20,000 in 2019 alone) in the region. From a multifamily sales standpoint, Greater Boston remains one of the top three markets in the U.S. in terms of where capital wants to deploy, he explained, but only 22nd in terms of deal volume, due to the scarcity of available product for sale. On a positive note for the region, Boston proper currently has 34,000 units in the development pipeline, with one-third under construction, another one-third approved, and the remainder in the approval process, but construction costs, a lack of available land and a tight labor pool continue to drive up rents in the urban core.

Hawkins reported that given the aforementioned length of the recovery, “there is some skepticism on the part of the institutional investor in terms of investing late in the cycle.” Not surprisingly, industrial and multifamily sales lead the way in terms of product type, she outlined, along with self-storage and net lease transactions, while office trades (particularly in the suburbs) are less favored. Hawkins reports that 2018 set a record for deal volume with $575 billion in transactions, “but we see a slowdown in 2019, a little more hesitation in terms of the economy, the geopolitical climate, and our own political climate,” she predicted.

Following the event, NAIOP’s Small shared her thoughts on the market. “The future looks great for the market, there’s no question about that,” she told The Real Reporter, noting that the dominant theme of the program seemed to be the insatiable demand for lab space. “Whether it’s Cambridge, the Seaport or the suburbs, the demand for life sciences and lab space is strong. While there may only be one Kendall Square, the strength of this sector of the market is fueling growth throughout Greater Boston.” 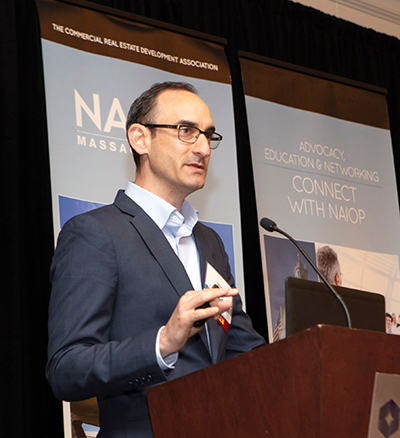 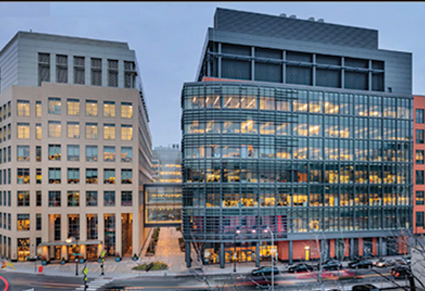 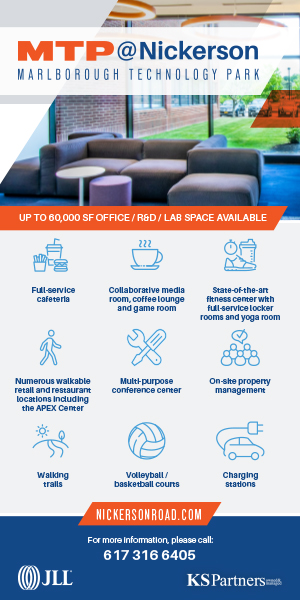