BOSTON—The Greater Boston real estate industry has struggled for years to become more inclusive and reflective of the community it serves. And while some strides have been made in recent years – particularly as the number of women in leadership positions has increased – Boston has fallen short in terms of representation and participation from people of color. The construction of the massive Omni Boston Hotel at the Seaport marked the first project developed under the “Massport Model,” which aims to set a new standard for integrating diversity and inclusion into every facet of the development and operation of public/private development projects. With the successful completion of the Omni, the model has attracted attention from academic institutions, governmental agencies, and professional organizations, and was the focus of a case study by the Harvard Kennedy School in 2019 (which provided background material for this article).

NAIOP Massachusetts hosted a tour of the hotel, followed by a panel discussion that highlighted the DEI (diversity, equity, and inclusion) aspects of the project. The Omni is a joint venture between Omni Hotels & Resorts and New Boston Hospitality, a group of Boston-based real estate firms and investors that includes The Davis Companies, Washington Capital Management, Spot On Ventures, The Taylor Smith Group, Boston Urban Development, and 39 local minority investors. Panelists included Jonathan Davis, CEO of The Davis Companies; Richard Taylor, chairman of the Taylor Smith Group and Managing Partner of Nubian Square Development; Jason Tilley, Vice President of Development with The Davis Companies; and hotelier Robin Brown, Principal of Spot On Ventures LLC.

The Omni Hotel project was spurred on by a 2010 market analysis that determined that the Boston Convention and Exhibition Center (BCEC) could host more conventions if it had more capacity. But in order to expand the convention center, they would need to add at least 2,000 additional hotel rooms (based on demand at the time). According to Davis, the BCEC was spending approximately $600,000 per show at the BCEC to shuttle patrons to and from hotels in suburban locations such as Quincy, Braintree and Woburn – which reduced the competitive advantage for the Convention Center. In 2013, Massport entered into an agreement with the Massachusetts Convention Center Authority (MCCA) to identify a development team best qualified to design, construct and operate a headquarters hotel under long-term ground leases held by Massport. In order to compete, the team selected to develop the hotel would need to meet meaningful diversity and inclusion goals set forth by Massport.

“Until this RFP, there was never much consideration given to spreading the opportunity broadly throughout all of the communities in Boston, most particularly communities of color,” said Davis. “What really ignited our interest and imagination about this project was that it was a great idea and an opportunity to make positive change for the community. But I also thought that we could create a competitive advantage because Richard Taylor was there, and I thought we could get first-mover advantage in bringing in key vendors, both on the construction and design side and with bringing minority investors to the table to really put us in a position to compete effectively.”

Taylor, a founding member of the Minority Developers Association, learned of the Massport hotel project in 2014 and contacted the late Howard Elkus of Elkus Manfredi Architects to hash out ideas. Taylor saw this as an opportunity to make legitimate change within the CRE ecosystem, believing that if D&I requirements were to become institutionalized and minority contractors could count on a reliable stream of business, those existing businesses would invest in their own growth and new minority-based enterprises (MBEs) could be formed, thus making the CRE industry more reflective of Boston. Taylor then partnered with The Davis Companies, and along with Robin Brown of Spot On Ventures (who was previously a partner at CWB Boylston, which developed the Mandarin Oriental Boston), the team selected the Omni brand for the hotel, which invested $100 million of their own money into the project, giving the operator skin in the game.

“I was not just looking for people with talent, I was looking for people that had values because this project had to be done differently,” Taylor told the NAIOP gathering. “And if you were trying to check a box, you really couldn’t be on this team for this deal.”

Elkus Manfredi formed partnerships with two black-owned architectural firms, Stull and Lee of Boston and Moody Nolan of Ohio. The project construction team was a partnership between Boston-based John Moriarty & Associates, and MBE-certified Janey Construction & Management Consulting. Both Elkus Manfredi and Moriarty formed joint ventures with their minority partners, who received 30 percent of the workload as well as the architectural and construction management fees.

“One of the genius moves by (Taylor) was that he knew that this RFP was coming down, so we got the largest-black-owned architectural firm in America to come to Boston to joint venture with Elkus Manfredi, and they committed to opening a permanent office in Boston, thereby building additional capacity within the system,” said Davis. “And when Greg Janey got together with John Moriarty Construction, Moriarty suggested working together on a smaller project first.” The two firms partnered on the new Pipefitters Local 537 headquarters in Dorchester, which earned the Best New Small Workplace Award by the New England Chapter of CoreNet Global this past summer. In 2019, Janey began working with Turner Construction on the $700 million redevelopment of the World Trade Center being built by Fidelity on Commonwealth Pier.

The completed Omni Boston Hotel at the Seaport totals 800,000 square feet on just 1.7 acres and features 1,054 guest rooms (including 52 suites) within two 22-story guest room towers: the luxury-oriented Patron Tower and the Artist Tower, which features rooms designed to replicate an artist’s loft. The hotel is home to the largest (25,000 Square feet) hotel ballroom in Boston and an additional 100,000 square feet of flexible indoor and outdoor space, as well as seven restaurants and sports bars, including the 3,000-square-foot outdoor Elevate Balcony that has westward views of the Boston skyline and the BCEC.

In addition, the hotel houses a 4,000 square-foot hospitality workers training facility, operated by Boston Education and Skills Training Corp (BEST), that works with 35 hotels that offer starting hourly wages as high as $21.43 and with Local 26, the hospitality workers’ union. The hotel (which will employ approximately 800 workers when fully staffed) workforce is 50 percent people of color. “The whole Omni team did a number of diversity outreach conferences so that when you walk around and see the people that work here, it looks like the City of Boston,” said Taylor. “Yes, we’ll do well with this project, but we’ll come and go, the construction and design teams will come and go, but who you see here every day – from the moment you drive your car here, all the way through (the hotel experience, including managers) – is people of color and women, and we’re excited about that.” 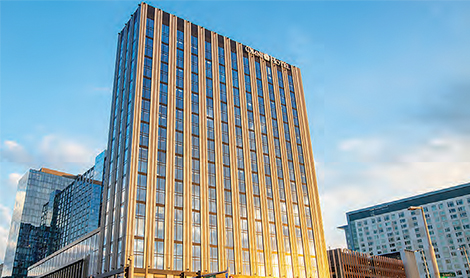 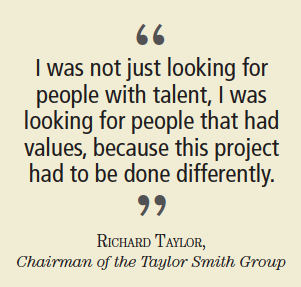