In REFA Forecast, Transforming of Buildings and Distribution Of Vaccines To Drive Recovery

BOSTON – With the vaccines providing a light at the end of the tunnel for a return to some degree of normalcy, Donald McCree, vice chairman and head of commercial banking at Citizens Bank, is predicting a “strong recovery on the back end of 2021 and beyond.”

McCree made his remarks as the keynote speaker at the recent Real Estate Financing Association (REFA) Annual Forecasting Program, held virtually in late January. McCree was joined by moderator Matt Pullen, executive managing director with Newmark, and panelists Tom Gilbane, managing member of the Rockpoint Group, owner of 3.5 million square feet of mostly office in Boston and Cambridge; Nancy Goldsmith, managing director of operations at Bozzuto Management Company, which manages over 5,000 residential units in the Boston market; and Ann Ehrhart, owner and co-founder of Boston Urban Partners, which focuses solely on retail and restaurant leasing in the Boston/Cambridge market.

McCree described 2020 as “a tale of four cities” – the pandemic, the Gulf standoff (the intensification of military tensions between Iran and the U.S. in the Persian Gulf region), the social justice crisis brought on by the killing of George Floyd by Minneapolis police officers, and the election. “We had the most unbelievable set of economic events that I’ve ever seen in my (40 year) career,” he said. “We’ve been referring to it as a natural disaster more than a recession, with wide swaths of our client base being affected literally overnight, and revenue streams going down 90 percent from where they had been even a month before.”

The economy was saved from a complete meltdown by what McCree labeled the “most dramatic set of actions taken by monetary authorities in size and with speed.” Unlike the response to the Great Recession of 2008, which he estimates took two to three quarters or more for the government to take action, thus prolonging the recession, the reaction was swift. During the March/April timeframe, the government began liquefying capital markets and injecting huge amounts of money into both the bond and the equity markets – resulting in the equity markets rallying to the high valuations that continue through now, and the bond markets had a record year across the board.

The high yield market saw $435 billion of issuance, 61 percent greater than the previous year, and the high-grade market had $1.8 trillion of issuance – the highest ever. M&A was down 65 percent in the second quarter, but up 400% in the third, and $545 billion was announced in the fourth quarter – the most robust level of M&A since 2001. “Things really bounced back, and what that allowed companies to do was to take very stressed liquidity profiles and to extend those profiles to multiple years,” said McCree.

The mission for Citizens in 2020 was to “focus on helping clients survive”. While the bank typically makes around 100 small business loans per quarter, Citizens made 45,000 PPP (Paycheck Protection Program) loans totaling $4.8 billion in a space of two months, which he estimates saved 540,000 jobs. The bank is currently processing 23,000 applications for the next round of PPP loans, totaling approximately $1.5 billion.

Going forward, McCree sees a lot of positive momentum around credit and credit risk, although problems will clearly persist in some sectors. Anything related to travel, hospitality and retail will continue to be in some trouble. From a credit standpoint, he believes the market is clearly bifurcated. “Larger public companies that have public market access have done better because of the Fed’s liquidity injection than smaller companies that don’t have public market access,” he said, although he thinks there may me relief on the way via the upcoming stimulus package.

In terms of the impact the Biden administration will have on the economy, he expects there to be a very significant infrastructure program, a very big focus on ESG, oil and gas regulation, and a stimulus program that arrives very quickly. He also anticipates that a lot of work will be done on a social and environmental agenda in the coming months. He speculates that regulators will seek help from the banking industry to monitor clients’ progress, which could affect the cost of capital in some places, but may in turn create new and different business opportunities where banks can help grow the economy and provide new investment opportunities.

“Sitting here today, we’re feeling like the world is in a pretty good place and we’re going to experience some positive economic momentum in the second half of the year once the vaccine is in place,” said McCree.

Pullen and the panel shifted the conversation to repositioning strategies and adjusting to a post-COVID environment. Gilbane led off with his thoughts on the office market, which he defined as “in hibernation right now”, but added that he expects Boston office to do well on the other side of the pandemic. “In this knowledge economy, with the knowledge-based worker, collaboration is really the key,” said Gilbane. “And we think that in bringing people together you get better outcomes. Nobody knows what office will look like on the other side, probably a hybrid workforce, but the office will be a critical part of growing businesses.”

One trend that is emerging is the increased amenitization of properties, which he believes will be the differentiator in attracting tenants. Rockpoint has pursued a value-add strategy in Boston, acquiring “assets that we felt could be transformed,” said Gilbane. One of those transformations was connecting 100 High St. and 160 Federal with a 22,000 square foot food hall, featuring a five-story atrium, a green wall, and a retractable window wall system that opens during warmer months for open-air dining and an outdoor patio. Another was 75-101 Federal St. which underwent an extensive lobby renovation and the conversion of some “dead space” into a 10,000 square foot, state-of-the-art fitness center at a cost of $15 million. The improvements have historically resulted in a $5 per square foot rent bump, “and we definitely saw much more stickiness in the rent rolls,” he added.

“It’s not cheap, but on the other side, the office market will need to do this stuff in order to attract tenants, so it’s going to be a very capital-intensive game,” he asserted. “It will definitely cause a lot of turnover for (other landlords) that don’t have the balance sheet or the patience to go through with this.”

On the residential side, the pandemic has had a profound impact on the way residents lease and use space, according to Goldsmith. Bozzuto conducted a survey in Q4 and found that while 36% of residents worked from home prior to COVID, 78% anticipated doing it in the future (although the survey was conducted prior to the vaccine announcement). The pandemic and the increase in WFH is creating demand for design and operational changes, including demand for outdoor spaces set up with power and Wifi; private work pods, and increased conference room facilities. One apartment community is converting guest suites or vacant units into WFH suites that can be rented for the day.

Bozzuto has also seen a rise in self-guided and virtual tours. “A lot of people are now leasing apartments without ever having crossed the (threshold),” said Goldsmith. And although there is less demand, the closing ratios using virtual tours have increased from 20-25% to 50%.

On the retail front, Ehrhart prefaced her remarks by noting that after peaking in late 2018/early 2019 “retail was headed for a correction pre-pandemic.” However, while the drop off in sales from the previous economic downturn in 2008-2009 was gradual, “the pain for the retail and hospitality industry has been so much more acute…what happened in 2020 was Wile E. Coyote off the cliff. It was just sheer drop off.” And while many in other CRE sectors may feel that the economy has reached an “interim normal, retail and restaurant operators are still in critical condition,” said Ehrhart, who added that one prominent Newbury St. retailer told her that sales for 2020 were down 70 percent from the previous year during the critical holiday season.

On a more optimistic note, Ehrhart said that unlike 2008-2009, there is confidence in the market with the understanding that there is a clear endpoint with the rollout of the vaccines. As a result, retailers and their landlords have been willing to work together “to keep the lights on, which has kept the vacancy rates from skyrocketing.” 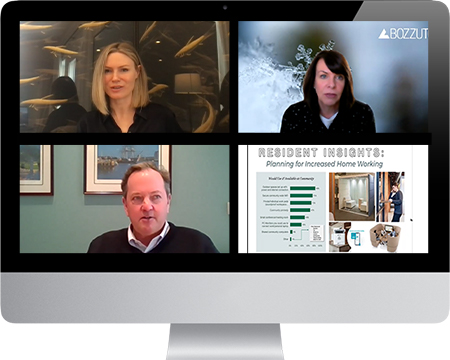