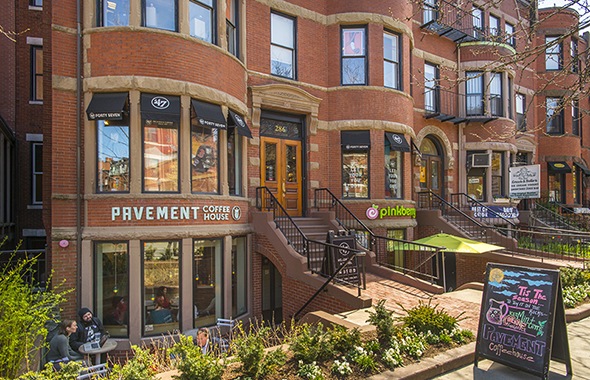 BOSTON—There is a two-for-one opportunity awaiting CRE investors scouring New England’s most renowned retail district, as Jamestown has retained Boston Realty Advisors to market 286-288 Newbury St., a 9,350-sf mixed-use asset comprised of abutting 19th century Brownstones whose physical similarities enable the upper levels to be conjoined. Searing demand for urban retail and especially along the eight-block Newbury Street strip between Boston Public Garden and Massachusetts Avenue is expected to draw a bevy of local, national and even overseas capital.

While being pitched sans pricing target, 282-286 Newbury St. is expected to trade well above the $7.97 million allocated by Jamestown in Nov. 2011 as part of its transformational $225 million acquisition of 23 Back Bay assets centered around Newbury Street, the holdings purchased from a partnership led by Taurus Investments. Due to contractual limitations, broker Michael A. d’Hemecourt was unable to discuss financial expectations in acknowledging the new exclusive listing being spearheaded by BRA’s retail practice group. Still, the industry veteran predicts a robust response for various reasons, including its institutional sponsor’s attention to detail.

“It is a great property that has been really well-managed and maintained and is very unique with the floor plates,” d’Hemecourt says of a feature whose physical congruity is rare for peer product, so much that the option to combine them provides 286-288 Newbury St. “a competitive advantage in attracting and retaining tenants,” BRA is proclaiming as part of its marketing campaign. Aiding d’Hemecourt in the assignment are Whitney Gallivan, Nick Herz, Christopher Donato and Jaime Russell plus BRA founder and Capital Markets chief Jason S. Weissman.

Presently, a portion of the asset’s top level is rented out for executive offices and the middle space is occupied by a growing animal medical practice, Back Bay Vet. Overall, 93 percent of the footprint—7,000 sf—is occupied by retailers. That roster includes Pinkberry, a national leader and pioneer of Newbury Street’s frozen yogurt stampede launched in the mid-2000s. There is also a popular eatery, Pavement Coffee House, and a sporting apparel store. Their “best-in-class” lineup delivers 97 percent of the current income for the buildings.

Combined, denizens of 286-288 Newbury St. provide in-place cash flow well into the next decade, with the average lease having another five years remaining. What rents might command then versus now is incalculable considering the meteoric rate increases seen on Newbury Street over the past five years and a continued expansion of the entire Back Bay shopping footprint. BRA points to the 600,000 sf of retail available at the Prudential Center Mall, that complex close to 286-288 Newbury St. given the Brownstones’ position between Gloucester and Hereford Streets. The Shops at Prudential has been repositioned and its retail mix elevated with new arrivals including Italian food market Eataly, plus Tesla and Under Armour, collectively “bringing a new and improved dynamic to the neighborhood,” BRA observes.

BRA’s retail team is quite familiar with the upper end of the street, not only due to the firm being based in the Back Bay but also in the retail operation being fresh off helping negotiate the arrival of TJ Maxx to 360 Newbury St. That highly publicized and complicated pact involves a 45,000-sf agreement where the clothing giant is occupying the former home of Best Buy. BRA was involved on the termination deal with Best Buy and in backfilling the space.

Even minus TJ Maxx, neighbors of 286-288 Newbury St. already comprised a diverse roster of retailers appealing to an equally wide range of generations and tastes, BRA outlines in pointing to Millennial draws such as Anthropologie, Newbury Comics and Nike up to luxury brands for the idle rich including Chanel, Tiffany’s and Valentino. “Newbury Street is very strong these days,” says d’Hemecourt.

Despite the multiple features of a core asset, BRA is pitching its newest assignment for having upside in leasing approximately 20 percent of the space not filled. Also, numerous development projects are underway throughout the Back Bay, including additional retail at 888 Boylston St. “The timing is excellent (for Jamestown) to prune this property,” observes d’Hemecourt.

Just what 286-285 Newbury St. might fetch is open to speculation. One comp could be found at the 283-285 Newbury St., the longtime home of Life is Good until that firm relocated to the Seaport District and harvested the 9,500-sf property two years ago last month to an overseas investor for $11.5 million, equating to over $1,200 per sf. Were Jamestown to match that somewhat aging metric, the outcome would be $11.2 million. In the dare-to-dream category, a retail condominium at 165 Newbury St. on Friday fetched $6.25 million—an astounding $5,950 per sf—in its sale by Frazer Holdings to Acadia Realty Trust through the Newmark Capital Markets team. If that were to occur at 286-288 Newbury St., the result would be a mind-boggling $55.6 million.