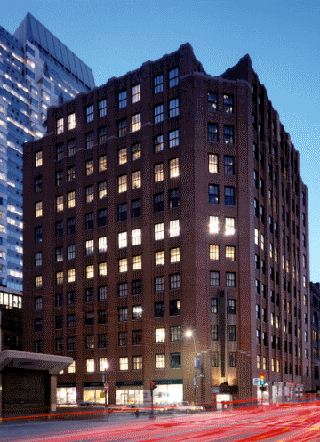 BOSTON—A popular art deco office building dating to the 1930s and reborn this millennium as a data center hub has computed into a big windfall for Beacon Capital Partners following its sale to a New York investment group, with 230 Congress St. trading for $77.0 million barely two years after being acquired for $49.7 million. JLL negotiated the latest exchange on a team led by Managing Directors Frank F. Petz and Jessica C. Hughes.

The brokers were unavailable to discuss Beacon’s harvesting of the 152,000-sf asset, and efforts to contact the buyer and seller before press deadline were unsuccessful, but Suffolk County Registry of Deeds records show the closing and a financing of $53 million from Midland National Life Insurance Co. “It’s huge,” one market observer familiar with 230 Congress St. says of the result, with the purchase in Aug. 2013 amounting to $327 per sf by Beacon versus $506 per sf spent by Northwood Investors.

Having churned some 75 million sf of product since its inception in 1998, Beacon Capital has had its share of notable hits over the

years, but one industry source calls the result at 230 Congress St. “an absolute grand slam” for the homegown firm which is led by the legendary Leventhal family, with current leadership including Chairman and CEO Alan M. Leventhal and President Fred Seigel.

One deciding factor in the substantial gain, according to sources, would be a dramatic turnaround in the fortunes of the downtown’s Class B office arena, an inventory that saw vacancies skyrocket after the recession whereas it has since become a popular option to a more diverse tenant population than the Financial District occupant of old who treasured high-rise towers over low- and mid-rise offerings.

“Beacon really capitalized on that (Class B resurgence),” concurs a downtown expert. Even so, that source maintains a more strategic advantage has paid off handsomely, that being 230 Congress St.’s prescient perch on a major telecommunications line that has made it viable for data center use, among a handful in the district that can offer such a function. “Beacon understood that from Day One, and they were able to add value by focusing on it even more and creating increased value (associated) with it,” says that source who further explains such space had been called into question for a time as a long-range revenue source due to shrinking technology, but says that concern has faded over time and such buildings remain in vogue.

Beacon purchased 230 Congress St. from Brickman Associates, which had held it for six years after paying $41.6 million in early 2007. Besides the telecom portion, 230 Congress St. likely also was coveted by multiple competitors of Northwood thanks to its equally viable existence as an office building, say observers who point to it being situated in the heart of the rapidly improving downtown and also bearing several elements of a well-constructed building, one dating to 1932 whose architectural flair goes beyond aesthetics, according to a broker detailing such features as high ceilings, generous window lines and an ability to accommodate open floor plans favored by many companies these days. “It works great for tenants,” the broker relays.

And there are plenty of tenants in the mix these days, or so it would seem in the newly released JLL market report indicating YTD net

Located on Fifth Avenue in Gotham, Northwood Investors was founded in 2006 by former Blackstone Real Estate Advisors CEO John Z. Kukrai. It focuses on major metropolitan areas of the US and “super-regional” European markets, with stated investment objectives including capital preservation and attractive risk-adjusted returns, creating long-term value through hands-on asset management and execution and targeting investment themes on macroeconomic and real estate market trends, according to the firm’s website. Hospitality and retail are among its specialties, the company indicates.